I’m a huge platformer fanatic. This starts with Donkey Kong, matures with Pitfall and solidifies with Super Mario Bros. -the best jumping in video games that even Nintendo themselves can’t replicate.

Let’s make a glossary for the sake of this discussion…

Jump
Launching something away from the ground at some direction and some velocity which will be affected by a force (usually gravity) in order to return it to the ground. (Note: typically a plain-ole jump but this stuff could apply to slingshot-ting birds, firing cannonballs, etc.)

Return
Your return to the ground after jumping/launching

Jump Velocity
The strength or speed of your jump

Jump Direction
The angle or direction of the jump

Forces
Gravity, wind, friction or some other directional force that affects a jump in some way but the user has no control over.

Committed Jump
A jump over which the player has no control of velocity or direction once launched (see: Castlevania, Scorched Earth, Angry Birds)

Dynamic Jump
Player has control of velocity, direction or both to some extent once launched. (see: Super Mario Freakin’ Bros., Sonic, Crash Bandicoot)

Floaty Jump
Dynamic jump into weak gravitational force resulting in oversteering through a slow return. Floaty jumps make it hard to apply your built in real-world understanding of physics resulting in unintuitive control. i.e. it sucks.

How do game developers program a jump?

First off, if your game does not rely on complex collisions with weird shapes or is not some sort of simulation you do not have to use a physics engine. You can write the code yourself.

I’m not discouraging the use of physics engines or other people’s code but if you’re really going to tweak the gameplay to perfection make sure you know how to change every value in the code like gravity, friction, velocity, etc.

How do developers code a jump?

Probably something like this:
If the player presses the jump button turn on gravity for the player and thrust him upward at a velocity that is higher than the force of gravity.
Since the gravity is always on (as long as you’re jumping) it will eventually override the vertical velocity and pull you back down. This results in a nice realistic smooth curve.
When the player hits the ground-turn off gravity for the player.

What can we tweak to make it more fun? Vertical stuff.

After a set height however the player must come down so they do eventually lose control of the vertical velocity. Remember: the level design really matters here. Super Mario Bros. has three platform heights that Mario can jump to on any given screen. This means there are times that you can do a little vertical climbing even though the game is horizontally oriented (but this isn’t a discussion in level design so…)

That covers vertical motion. What about horizontal?

Good ole physics dictates that we can calculate vertical and horizontal math separately. So here’s what happens with horizontal:
The player can either NOT have control over movement in the air or they can press forward and backwards to guide the jumper. Friction should be added for a good heavy feel.

What can we tweak to make it more fun? Horizontal stuff.

I simply want developers to think about and spend time on perfecting these values and forces. If you’re lucky it’ll feel like Super Mario Bros.

Now go play Super Mario Bros. and think about the forces, feel the control and you’ll start to understand why the jumping in Super Mario Bros. itself is fun to play with and has kept players coming back for over 25 years. 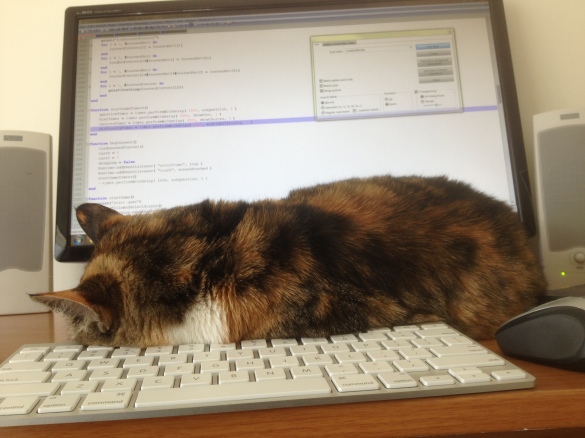 I had a fellow developer ask me how we had put out so many apps in such a short time and thought I would share my particular experience in creating our pipeline.

Make engines, not apps
We started this with our third app, Coloring Farm Touch To Color. The engine allowed us to change artwork in an image folder and content of an xml file to create a brand new app. We created a farm, safari and princess coloring app with this engine that are very popular. The original code took a few months to create and we added little features as we released new titles. We followed the same process for our puzzle apps, Puzzle Farm, Princess Fairy Tale and Animal World.

Reuse everything
We have accumulated a great library of sounds that we reuse frequently and try to reuse code for animations, particle effects, etc. Coloring Farm, Puzzle Farm and Animal World all used the same artwork and they were delivered to us from the artist in vector format with everything separated in easy to manage layers. This allowed us to take parts and rearrange, resize, etc. to build new landscapes, game assets and games.

Delegate
You have to delegate tasks to free yourself up for new responsibilities. Look for talent and start building relationships with people you can trust to carry on the work you’ve started. We owe our recent successes to Amanda Linn and Matthew Taylor, a brilliant developer and sound designer respectively. We are currently looking for more talented developers who can maintain our standards and vision.

I will continue this series when I am inspired to do so. That’s it for now. I have to get back to work.